This article was originally published in Nomacorc website magazine in the summer 2016, following my three day visit to Trevallon in April 2016. A cold Mistral was blowing for most of that week, so hiding in the cellar some days, despite the noise, was a respite. Sometimes the most unexpected vineyard visits appear from nowhere. While researching my article on new trends in premium rosés for Nomacorc, I discussed the use of Stockinger barrels with Stockinger’s European agent Thomas Teibert of Domaine de l’Horizon. Thomas asked if I were interested in going to Domaine de Trevallon at the end of April to see a rare event – the installation of five 3400l barrels by Franz Stockinger, head of coopers Fassbinderei Stockinger from Waidhofen-an-der-Ybbs in central Austria. Trevallon and its wines has always been one of my favourite estates, and the opportunity to observe this unique occasion, to see the domaine from a different perspective and taste the results, was one not to be missed.

View of Domaine de Trevallon on the western edge of Les Alpilles Domaine de Trevallon, one of the most famous Provence estates, is located on the north western slopes of the small Alpilles mountain range overlooking the Rhone valley and not far from Châteauneuf-du-Pape. The domaine’s artistic origins still dominate most articles: The romantic holiday home of Parisian artists, friends of Picasso, their son Eloi Dürrbach’s creation of the wine domaine, planting Cabernet Sauvignon cuttings from Château Vignelaure, whose owner Georges Brunet had brought cuttings from his Bordeaux estate Château la Lagune in the 1960s. The quality of Dürrbach’s wines made Trevallon an early flagship for Provence, though Trevallon is not included in the Les Baux de Provence appellation due to use of 50% Cabernet Sauvignon, 50% Syrah.

Trevallon’s underground cellar was originally dug out in 1982, with Kennel barrels from the 1970s placed in the cellar at the time. In 1989 and 1999, when more large barrels (“foudres”) were needed, 3000l barrels from Seguin Moreau were installed. In 2012 a large modern cellar with fermentation tanks was built above this with access to it below via spiral staircase or lift, large enough to hold a pallet, but too small to take a foudre. Usually new barrels arrive ready to be moved into a cellar and used, but unless the cellar has access for these large barrels, the winery must either use smaller barrels or build the barrels in the cellar. Barrels can last 50 years, but when some of the old barrels started to leak, the Dürrbachs knew that these would need to be gradually replaced. Antoine, Eloi’s son, had been to a friend’s vineyard and tasted wine from Stockinger barrels and was impressed with the quality.

The foudre cellar is full!

Trevallon decided to replace 7 of their 3000l foudres, with two smaller (2800l) and five larger (3400l) foudres, to slightly increase total capacity and to allow for a smaller barrel to remain empty to help during racking. With a 6 to 12 month lead time to delivery, the two 2800l foudres were installed in November 2015 with some small barrels for their white wines. Originally the Dürrbachs had wanted to stagger the installation of the new 3400l foudres, with two in 2016 and three in 2017, but Stockinger preferred to do all five together due to the difficulty of access and to save journeys. The cost was substantial, 63000€ for the five foudres, including delivery and installation. Franz Stockinger rarely accepts orders which requires difficult installation in the cellar. It takes a team of three men one day to install two foudres and, due to the possibility that at first trial (with water) the foudre may leak, another visit may be required. It was going to take three days to install all five foudres. There is a growing number of domaines using Stockinger, reflecting the current trend to have less overt oak character, with marketing relying strongly on word-of-mouth between winemakers (they purposely have no website) and Teibert reaching out to clients. Not all domaines wish to advertise that they use Stockinger barrels, preferring to keep this as their secret USP in making their wine. Some promote their use of Stockinger as a by-word to the quality of their wine. Stockinger is happy for this spread to continue slowly as they have reached capacity and cannot take an increase in orders. They produce mainly large oak vats, but also a small quantity of 225, 300, 500 and 600 litre barrels. Their main market is Austria, Germany, Italy and France but they also export to South Africa, Israel, the US and Australia. Stockinger uses mainly Austrian and German oak (Quercus sessilis aka Quercus petraea) for manufacturing their barrels and vats. According to Caroline Gilby MW, this oak has the tightest grain and higher levels of extractable aromatic compounds such as eugenol, lactones and vanillin which Romana Echensperger MW describes as contributing ‘savoury-sweet, spruce honey’ characters, and a lower concentration of oak tannins than Quercus robur. The oak is seasoned by the traditional ‘octaeder’ system in the open air to reduce greenness and astringency for 24 to 30 months for the small barrels to 48 to 60 months for the big barrels. The longer the oak is seasoned, the less oaky, toasty character is evident, but this long seasoning means greater cost. Below shows the range of different grain textures found in different woods used for barrels.

Franz Stockinger arrived with Alexander Wachauer and Tibor Várda and the five foudres on trucks on the Sunday. Early the following morning they started work on the first barrel. Pascal Febvre, head of viticulture at Trevallon, also joined the team. 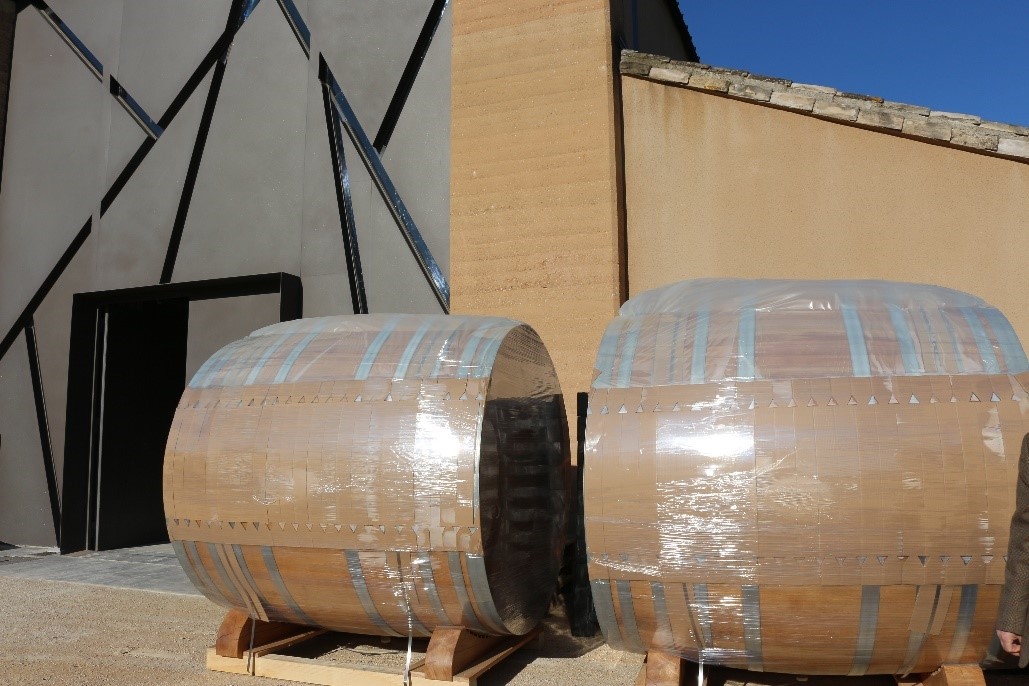 The new barrels arrive at Trevallon

The hoops were eased off using a wedge called a hoop driver, and hammer. The wedge is repeatedly eased round the edge of each hoop and hammered.

Taking the hoops off

How a hoop driver works After the hoops were removed, diagonal chalk lines were drawn across the barrel as a guide to replace the staves. As each piece of the barrel is unique, their place in the barrel needs to be precisely marked. Each stave was numbered: Roman numerals one end, Arabic at the other (later covered when the hoops were replaced) to ensure the staves were replaced the right way round. The heads were also numbered with matching Roman or Arabic numbers.

Roman numerals A temporary half hoop was added at each end to keep an arc of staves attached to the top and bottom of the head, as the base to rebuild the barrel.

Temporary half hoop with the 'cant' ends of the barrel head The staves, head pieces and hoops were then moved down to the lower cellar in the lift to be then reassembled in situ.

Carrying one of the hoops

The lift is barely big enough for part of the barrel 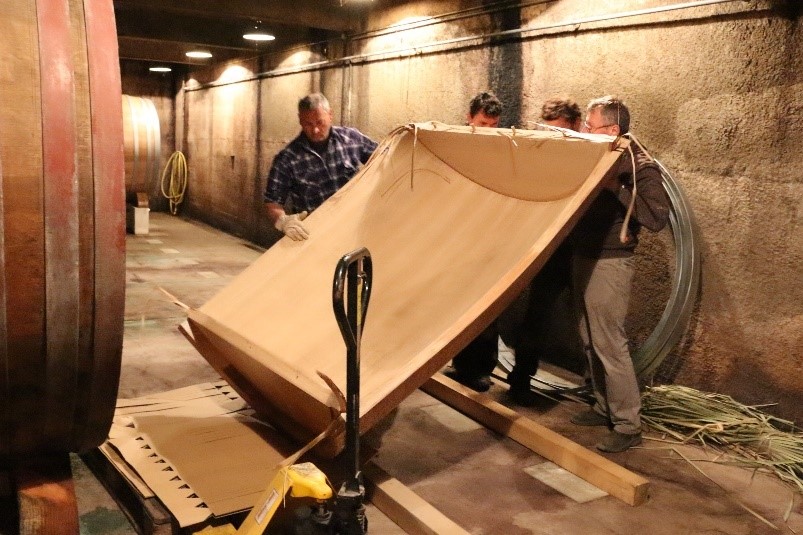 Moving part of the barrel into the cellar The two end ‘heads’ were replaced on either end of one of the fixed arcs with long lengths of reeds placed in-between each piece of wood. The reeds will swell when the wine is put in, to further tighten the fit and prevent leaks.

Placing the head at the back of the barrel

Putting on the top half of the barrel on to the two complete heads After the other half of the barrel was placed on top, then the staves, with a smear of mastic at each end for extra waterproofing, were replaced, also with reeds between each. Each stave is hammered down.

Fitting in the staves

Last staves fitted in The hoops were hammered on, again using the hoop driver to push them back into their original tight fit. As they were pushed further and further on the barrel, Alexander and Tibor worked in unison with one holding the hoop driver, the other swinging the hammer. The noise in the cellar was deafening!

Tibor hammering on the hoops The final barrel has a seamless smoothness showing no signs of being taken apart, moved or hammered.

The smooth surface of the finished barrel What impact would five new and two one-year-old Stockinger barrels have on Trevallon’s red wines? Ostiane Icard, Eloi’s daughter, gave me a tasting of the Cabernet Sauvignons and Syrahs from the 2014 and 2015 vintages still in barrel. Trevallon ages the wines for two years before blending them together. There is no selection or blending, as they work on the principle that under Pascal Febvre’s careful management of the vineyards, all the grapes come in perfect condition, and all will be included (as there is no second label or special cuvée), purely reflecting the vintage and terroir. This explains the attraction of Stockinger barrels. As Franz Stockinger explained, his aim is to make barrels which do not add layers of oak taste, but enhance the structure and taste of the fruit. The oak is not toasted, and is a blend of German oaks for softness and Austrian oaks for structure. This character has meant that Stockinger have been for some time highly regarded by white wine makers and more recently producers of quality rosé and red wine.

Tasting with Ostiane Icard Using new barrels is a sensitive issue due to their impact on taste. Winemakers using smaller barrels of 250, 300 or 500l often have a steady turnaround of new, 1-, 2-, and 3-year-old barrels to harmonise the impact of new barrels. The smaller the barrel, the greater the ratio of wood to wine contact. With the larger foudres, there is less oak contact. New foudres are not needed to contribute the oak character to the wine as with smaller barrels. In early July, the five new foudres at Trevallon were filled with water and 1kg salt per hl, to remove as much of the oak tannins as possible. Ostiane and I tasted the Cabernet Sauvignon and Syrah 2014 from old and new barrels and the same two varieties from the 2015 vintage in Stockinger. Obviously there was the added consideration of age. The 2014 had been a difficult year needing more pumping over while the 2015 had been a very good year for reds. Nevertheless, the wines aged in the old barrels seemed more fruit-forward while those aged in Stockinger appeared more restrained and austere with hidden fruit. They were not as oaky as might have been expected from a year in new foudres, but more structural. Syrah 2014, old foudres. Not an easy year so needed to destalk, pumping over and more ageing on the lies. Ripe black mulberries and blackberries, with firm, almost austere wild berry fruit tannins. Hints of garrigue and stony minerality and lifted by beautiful fresh acidity. Reminiscent of northern Rhone Syrah. Syrah 2014, new Stockinger foudres. Less ripe black fruit evident. Austere wild hedgerow fruit with firm, slightly severe, inky tannins. Fresh acidity with a slight terroir chalky character. A sense of dormant power, beautiful depth and blackness. Syrah 2015, old foudres. 2015 regarded as a near perfect year for red wines. A year younger and the fruit has yet to show. Powerful mineral and iodine character typical of the variety. Whiffs of spicy perfume, notes of stone, salt and hedgerow fruit. Hidden layers suggesting complexity, but for now dominated by firm dry tannins. Cabernet Sauvignon 2014, old foudres. Beautiful fragrant floral aromas, deep purple violets, followed by intense blackcurrant fruit and fresh blackcurrant leafy freshness and acidity. Firm silky tannins. Cabernet Sauvignon 2014, new Stockinger foudres. Youthful austerity with intense black inky fruit and mouth-coating dry, firm tannins. Structural and powerful. It will be interesting to taste the influence of the Stockinger barrels on the final blend, but the above tasting suggests a touch of extra, firm structure in the wines. The two new barrels introduced in 2015 made up 13% of the wine in Stockinger foudres. For the 2016 vintage, 40% of the wine will be in Stockinger.